“Assault is one of the most commonly alleged predicate acts of domestic violence. A plaintiff (victim) must prove by a preponderance of evidence that an assault occurred through their testimony, video evidence, pictures, hospital reports, witness testimony, physical injuries, etc.” 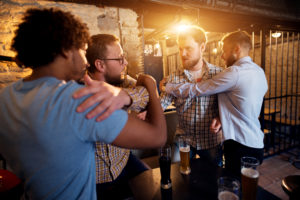 An assault can be a fight, scuffle, scratching, spitting, or any other physical violence which results in an injury to the victim. A charge for assault can arise after police are called to the scene of an alleged domestic violence incident or if a victim files a citizen complaint for assault after domestic abuse occurs. Sometimes, police will get involved in an assault case after a domestic violence victim seeks treatment at a local hospital or emergency room. Regardless of the circumstances that give rise to a domestic violence assault charge in New Jersey, it is crucial to understand what these charges may mean for you or someone you love.

The New Jersey domestic violence lawyers at the Tormey Law Firm have successfully handled domestic assault charges and restraining order cases in practically every county in New Jersey including in Hackensack, Elizabeth, Jersey City, Bayonne, North Bergen, Morristown, Paterson, and Newark. Our firm’s founder, Travis J. Tormey, has been recognized as a top trial lawyer under 40 years of age by the National Trial Lawyers Association and by the National Association of Criminal Defense Lawyers. In addition, Mr. Tormey has been cited by numerous publications as a legal resource on domestic violence, including appearing on CBS Radio concerning the Ray Rice aggravated assault domestic violence case in New Jersey.

If you or a loved one is in need of legal assistance regarding a domestic violence assault in New Jersey, you’ve come to the right place. Contact our law offices anytime for immediate assistance at (908)-336-5008. The initial consultation is always provided free of charge.

“From the moment I entered Mr. Tormey’s office, I experienced an air of calm and confidence. His demeanor exuded his command of his profession as well as a knowledge of the human element in dealing with the intricacies of the law. After our initial meeting, I was satisfied that he had reviewed my case, that I knew what was expected from me, including fees, and a sense that the outcome would be positive. He maintained contact with me, kept me informed, and returned all phone calls in a timely manner. I am totally satisfied with his representation and have no reservations in recommending Mr. Tormey and his firm.” – Former Client

Assault is one of the predicate acts of domestic violence included under the NJ Prevention of Domestic Violence Act. This means that an act of assault is considered grounds for a restraining order, as well as a criminal offense subject to prosecution. If a person is accused of assault, they may become the defendant at a final restraining order hearing and be required to appear in criminal court for a separate proceeding.

If you are charged with simple assault, your case will be handled in the Municipal Court in the municipality where the charges were filed. On the other hand, a charge for aggravated assault will be sent to the Superior Court in the County in which the charges were issued. In either scenario, a conviction will leave you with a criminal record and expose you to other serious punishments. Not only may you be forced to serve time in jail, but you will be prohibited from owning or possessing a weapon for the rest of your life.

NOTE: A criminal charge does not need to be filed for a restraining order to be issued and vice versa. They are completely independent cases and have nothing to do with the other. Just because a person wasn’t arrested and charged criminally with simple assault or aggravated assault, doesn’t mean that a Plaintiff cannot prove assault as a predicate act of domestic violence in furtherance of a restraining order case.

Preponderance of evidence is a “more likely than not” standard so the plaintiff must establish 51% that the offense was committed and that is sufficient in a civil case. In other words, even if a prosecutor can’t prove domestic violence assault beyond a reasonable doubt in criminal court, a judge can determine that assault occurred “more likely than not” and issue a restraining order.

Some of the most common evidence used by a Plaintiff in a restraining order case in order to prove an assault occurred include the following:

The Plaintiff does not need all of this evidence to prove an assault occurred. He or she can merely testify and if the Judge finds them credible, that could be enough to prove the predicate act of assault. However, the more evidence provided to support the Plaintiff’s testimony, the better chance the Judge will find the predicate act of assault and issue a final restraining order.

Have you been charged with assault related to domestic violence in New Jersey? The attorneys at The Tormey Law Firm will thoroughly examine the circumstances in your case and devise the best strategy to protect your interests. For a free consultation with an experienced domestic assault lawyer, contact us anytime online or call (908)-336-5008.

With offices in Bergen, Morris, Essex, Camden, and Monmouth County, we serve communities throughout New Jersey. Arrange an appointment at the office location nearest you and get the information you need as soon as possible.