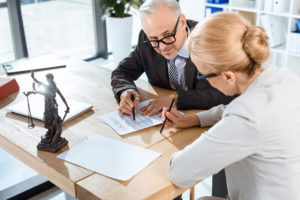 Have false allegations of domestic violence been made against you in Somerset County? We can help.

In addition to being served with the restraining order, the client was also arrested and charged with simple assault, a disorderly persons criminal offense punishable by up to $1,000 fine, 6 months in the county jail, and a permanent criminal charge on his record. To further complicate matters, our client was not a United States citizen so if a permanent restraining order was issued against him and/or he was convicted of simple assault he could be deported from the United States or it could prevent him from becoming a naturalized American citizen.

I’ve Been Served with a Restraining Order and I have a Criminal Charge: Are they the same?

It’s complicated to understand but the restraining order and criminal charges in New Jersey are completely separate and distinct matters totally independent of each other. The restraining order is a civil case which is handled in the Family Division of the Superior Court. The case is handled before a Superior Court Judge. The plaintiff can dismiss the case, negotiate a potential settlement agreement with the defendant (known as a civil restraints agreement), or proceed to trial. At the trial, the Plaintiff has the burden of proof and must show that there was a predicate act of violence, a prior history of violence, and that a reasonable person in her position would be in fear for their safety. Both the plaintiff and defendant can represent themselves in court at the hearing or they can hire legal counsel. If the Judge finds enough evidence for a final restraining order, then it will be issued. It’s permanent in New Jersey and never expires. The defendant is fingerprinted and placed into a database for domestic violence offenders and is prohibited from having any contact with the plaintiff, their home, workplace, etc. If the order is violated, the defendant will be arrested and charged with contempt of court and face potential jail time.

On the criminal side, the charges will be handled in the court that has jurisdiction. So, in this case, the defendant was charged with a misdemeanor, simple assault, so the case was handled in the Bridgewater Municipal Court. Had the charges been more serious such as felony charges for aggravated assault or terroristic threats, the case would be handled in the Superior Court, Criminal Division, in Somerset County. Criminal charges in Superior Court are handled by the Somerset County Prosecutor’s office. In Municipal Court, the case is prosecuted by the Bridgewater Municipal Prosecutor. However, the alleged victim has input as to how the case is resolved and whether or not the case will be prosecuted in court.

For criminal charges, the case must be proven beyond a reasonable doubt. If the defendant is convicted, he will have a criminal record, could face probation, fines, and even jail time depending on any prior criminal history and the degree of his charges.

How was this case resolved in Bridgewater Municipal Court and Somerset County Family Court?

In this case, there was very little evidence of assault or any past history of domestic violence. Based on these issues, Mr. Tormey was able to negotiate a satisfactory solution with the attorney for the alleged victim. The parties entered into a consent order (civil restraints) which detailed their future interactions and the management of their only child. In addition, the alleged victim agreed to drop the restraining order and to assist in convincing the State of NJ to drop the simple assault charge against our client.

Pursuant to our agreement, the civil restraints was entered and the restraining order was dropped. Then, we appeared in the Bridgewater Municipal Court and the simple assault charge was also dropped. This was crucial for our client as this result allowed him to avoid any immigration consequences and potential deportation. In addition, he was able to file an expungement immediately to have the arrest removed from his record as well.

The client was tremendously satisfied with the result and the services he received from the Tormey Law Firm LLC.

If you or a loved one needs assistance with a permanent restraining order in Somerset County NJ, contact the Tormey Law Firm for help. Our attorneys are available immediately to assist you at (908)-336-5008 and the initial consultation is always provided free of charge.