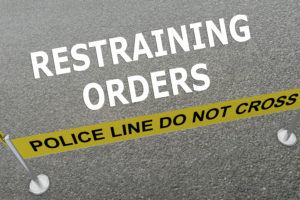 Here is a case where a Bergen County restraining order was dismissed by the judge thanks to the Tormey Law Firm LLC. Travis J. Tormey recently represented a client at a final restraining order hearing (FRO) in the Bergen County Superior Court located in Hackensack, New Jersey. In this case, we represented a young woman with a temporary restraining order (TRO) issued against her. Luckily, we had the case dismissed very quickly because the plaintiff did not have jurisdiction to file the TRO against her under the domestic violence act. Our client was a girl in her early twenties who was dating a young man who’s parents did not approve of the relationship. She was often over his house and his father would continually throw her out of the house because he did not approve of their dating. Then, the father filed a restraining order against her to try and keep her out of the house for good.

As a young person, it was crucial to avoid having a final restraining order (FRO) issued against her. If it was issued, it is permanent in New Jersey and never expires. It will carry to every state in the US. In addition, she would be fingerprinted and placed into a statewide database for domestic violence offenders. She would be prohibited from owning firearms, and, if she was ever accused of violating the FRO, she would be arrested and charged criminally with contempt.

Luckily, the plaintiff in this case did not have standing under the Domestic Violence Act to file a restraining order against the defendant because they were not related, they never dated, and they never lived together. Although his attorney tried to argue that her staying over their house a few times constituted living together, the Judge did not agree and dismissed the restraining order based on a lack of standing for the plaintiff. This was a very satisfying result for our client and the law firm.

Could they file criminal charges for domestic violence in Lodi NJ?

Yes, criminal charges can always be filed separate and apart from a restraining order. These are two totally different and distinct cases which have nothing to do with each other. For example, in this case, the police could have tried to charge our client with trespassing for going to her boyfriend’s house in Lodi without the parent’s permission. In addition, even if the police refused to issue a criminal complaint, the father himself could have gone to the court and tried to sign out a civilian complaint for trespassing against our client. The Judge in Lodi would determine whether or not there was sufficient probable cause for the issuance of the complaint.

Then, the trespassing case would be handled in the Lodi Municipal Court because it is a misdemeanor. If felony criminal charges were filed such as stalking or terroristic threats, these charges would be handled at the Bergen County Superior Court in Hackensack, in the Criminal Division.

The restraining order, on the other hand, is handled in the family division of the Bergen County Superior Court in Hackensack. On the criminal case, the Lodi Municipal prosecutor would handle the case and prosecute the charges for the State. As in all criminal cases, the State must prove the charges beyond a reasonable doubt.

NOTE: Criminal charges and a restraining order are completely independent and one result in one court has no bearing on the result in the other court. A defendant can win both cases, lose both cases, or win one case and lose the other. Because the standards of proof are different and the Judge’s are considering different things, the outcomes have nothing to do with each other.

If you or a loved one is facing a permanent restraining order in Lodi NJ, contact the Tormey Law Firm LLC for immediate assistance. Our lawyers are available 24 hours a day to assist you at (908)-336-5008 and the initial consultation is always provided free of charge.