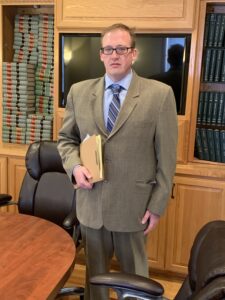 Jeffrey Skiendziul is a talented New Jersey criminal defense attorney with ten years of experience appears on behalf of clients in courts across the state. He joined the Tormey Law Firm in 2021, where he represents clients on matters relating to the Second Amendment such as Weapons Forfeiture Hearings as well as focusing on Domestic Violence, Restraining Order matters, and Temporary Extreme Risk Protective Orders.

Jeffrey Skiendziul attended Arcadia University, where he graduated with a bachelor’s degree in political science and a Minor in Pre-Law. Upon graduating Arcadia University, Jeffrey enrolled in and graduated from Thomas M. Cooley Law School with his Juris Doctorate with a concentration on Litigation.  After graduation from law school, Jeffrey passed the New Jersey Bar Exam and became licensed to practice law in New Jersey. In addition, Jeffrey is admitted to practice before the United States Supreme Court.

Previously before joining the Tormey Law Firm, Jeff worked for one of the premier gun rights law firms in New Jersey and he has personally handled hundreds of gun permit applications, gun permit denial appeals, and domestic violence restraining order matters in his distinguished career.

Personally, Jeffrey is a former NCAA Division III Swimmer while enrolled in college. He is a Master Mason – 3rd Degree at Durand Lodge # 179. Jeffrey is involved in other organizations such as POAC, which aid people and their families who have relatives diagnosed with Autism Spectrum Disorder (ASD). Jeffrey is also bilingual, who can speak Polish.  Adwokat mowi po Polsku.

Weapons Seized After a Restraining Order Was Filed

If your weapons were seized based on a temporary restraining order being filed, we can help. Depending on what happens with your matter, it’s possible that your weapons could be returned to you. But that doesn’t automatically happen and is up to the County Prosecutor’s office. As a result, it’s important to have an attorney assist you throughout this process. Luckily, Mr. Skiendziul has assisted numerous clients with weapons returns throughout New Jersey over the last 10 years and is ready and able to assist you now. Contact the office for immediate assistance.

Here is a review from one of our many satisfied restraining order clients whose case was successfully handled by Mr. Skiendziul:

“I don’t even know where to begin as I’m incredibly relieved after all of the stress. I just needed to say thank you! Jeff was phenomenal today, we won the case and the order is being dismissed! You know I was incredibly nervous, I had mixed emotions leading up to it, did not speak with you too much regarding specifics, but had to keep my faith in you guys and I was not disappointed at all! The other attorney tried twisting and turning things to get the outcome they desired but Jeff was calm and collected and overall amazing. Thank you again!!”  – Greg