The Role of Medical Records in Your Domestic Violence Case

It is important to understand the significance of medical records as evidence of domestic violence in New Jersey courts. 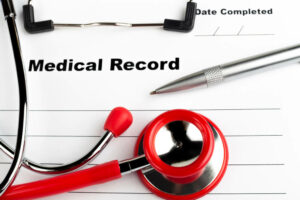 Strained relationships between spouses, dating partners, significant others and even roommates can turn ugly, even violent. When that happens, the injured party may need medical care. A victim of domestic violence may see their regular doctor or an emergency room doctor, depending on the severity of the injuries. The physician then records the visit in medical records, which typically include the observations of the physician, statements of the patient, medical history, diagnosis, treatment, and follow-up instructions. However, the report and findings may not be consistent from one medical provider to the other. Some physicians are more thorough than others, while some try to remain neutral in their conclusions. Regardless, the medical records become primary sources in a court of law when the victim seeks protection and decides to file a restraining order in a domestic violence case. As either the victim or the alleged abuser accused of domestic violence, be sure to have a complete understanding of the role that medical documentation and evidence can play in your domestic violence matter. If you find yourself involved in one of these cases in New Jersey, contact our seasoned team of New Jersey Domestic Violence Attorneys at (908)-336-5008. A member of our legal team is here to offer you the answers and assistance you desperately need. Consultations are free and entirely confidential, so please do not hesitate to get in touch.

Do Medical Reports come into Play in Domestic Violence Cases?

A family law judge grants a restraining order upon evidence of abuse, either chronic or rare, and the one accused of abuse is a danger to the victim. Abuse may be physical, psychological, or emotional, typically centered around one party’s attempt to control another. The proof of such abuse may be in the testimony of the restraining order applicant, witnesses, and records, like police reports and medical records. For example, when the police respond to the scene of a domestic violence incident, they usually report factual observations and witness statements, including those involved in the domestic violence. A judge may form a picture of what occurred from such a report if the information is detailed and objective.

Medical reports, however, are not prepared with legal proceedings in mind. Instead, doctors report what is essential medically and may harm the victim’s legal case unwittingly. In a U.S. Justice Department study of domestic violence victim medical records as legal evidence, the findings show that medical records can sabotage a domestic violence victim’s legal claim and, therefore, their protection against a significant other who harmed them. In fact, many legal advocates do not use medical records to support an abused woman’s claim because the records are cost-prohibitive, incomplete, illegible, inaccurate, or damaging. The reason for some of the damage is the medical provider’s interest in neutrality.

To accomplish fairness, medical personnel use language they believe is neutral, such as the patient “alleges” or “claims” or casts the reported cause of the injuries as the “perpetrator” or “assailant.” In addition, they may label the reported incident as “domestic violence.” These are all examples of legal language to describe what the patient reports, possibly casting doubt on the patient’s integrity. An allegation is an unproven fact, and such language translates in a court of law as the victim being suspect. Moreover, calling someone a perpetrator or assailant or using the term “assault” concludes a crime occurred without the benefit of due process. However, if the physician reporting the patient’s narrative uses descriptions or names of the party who hurt him or her, there is no conviction before a trial on the matter. The alleged abuser is merely named or described for identification purposes.

The better practice, according to the suggestions in the report, is to quote what the patient states using neutral introductory words as “states,” “reports,” or “says.” In that way, the physician reports the patient’s actual words without judgment. A judge can read the patient’s statements and admit such information into evidence as excited utterances. Excited utterances are admissible as evidence for a restraining order trial. So, when a patient reports what happened fresh from the abuse incident, her statements are more likely true as she is still under the stress and adrenaline rush from suffering physical harm. Legally, that is significant evidence. A physician may not be aware that they document vital evidence that no others bear witness to, except for the police or an emergency medical technician (EMT) or paramedic who transports the person to the hospital. These excited utterances may provide the judge with sufficient evidence to grant a restraining order, primarily when the abuse occurred behind closed doors and only the parties bore witness.

Medical details help determine the extent of the injuries and the validity of the alleged victim’s statements.

Another problem, illegibility, is serious. When the record contains crucial medical information that no one can read, the history is useless as evidence. However, more physicians use computers and type directly into electronic records now, reducing this problem. Educating doctors about the legal use of medical records may also help with illegibility and reporting overall. For example, if reporting physicians understood how a judge looks at records as a source of facts supporting or refuting what the abused party testifies to in court, they might be more detailed. They might also include pictures of the patient’s injuries and when the patient saw the doctor to paint a picture of how long after the incident occurred that the patient saw the doctor. For example, suppose a woman reports her injuries and describes the incident right after it happened rather than a week later. In that case, the immediacy of the report validates her statements.

Whether you are the plaintiff or defendant in a domestic violence case, you want to be able to use medical records to prove or disprove facts that may bear on the judge’s final decision.

More documenting, by medical pictures of injury or camera footage from medical transport units, with social workers, from the victim, and detailed reporting by the physicians themselves, helps judges decide cases with more certainty in the proof or lack thereof, and if it is necessary to issue a restraining order to protect people from harm. Additionally, there needs to be more education for physicians and administrators who document and maintain medical records about how records work as evidence and their impact on the outcome of domestic violence cases. With foresight, the medical personnel preparing the report can avoid prejudicing one party or the other and potentially prevent further injury.

A domestic violence restraining order has grave implications for the restrained party and potentially life-saving benefits for the harmed party. On either side of these legal proceedings, you want your attorney to help you deliver the best evidence to help you succeed when the stakes are so high. Ensuring the reliability of the medical report proving the existence and extent of injury should be a priority that extensive communication and collaboration between the client and their lawyer should facilitate. Individual safety and freedom depend on it. Call (908)-336-5008 to speak to domestic violence attorney regarding your particular case 24/7 in a free consultation.

Previous Can Men be Victims of Domestic Violence?
Next Battered Woman Syndrome: A Pattern of Abuse, A Form of Evidence