Why Would a Judge Deny a Restraining Order?

Reasons for a denial of a restraining order vary, based on whether the order being denied is temporary or final in nature. 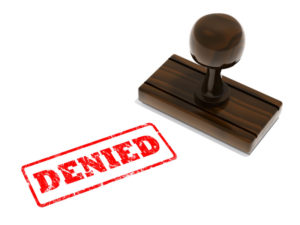 Why would a judge deny a temporary restraining order in New Jersey?

Usually, a Municipal Court judge hears temporary restraining order applications when the Superior Court is closed.  According to Directive #13-19, if a plaintiff is denied a temporary restraining order by the Municipal Court, there are available options for the denied plaintiff.  The plaintiff can make an immediate application for a de novo hearing in the Superior Court.  If the Court is closed, due to a weekend or holiday, the plaintiff can exercise an immediate review to an on-call Superior Court judge.  During this telephonic hearing, the judge will review the complaint and make a decision on the matter.

Similarly, if you have been denied a temporary restraining order by a Superior Court judge, there may be reasons for the denial that cannot be overcome, but you still may have other options available.  First, in the State of New Jersey there needs to be a particular type of relationship in order for a prospective plaintiff to be granted protection and relief through a restraining order.  Relationships may be present or former spouses, past or current household members, co-parents to a child, or those presently or previously in a dating relationship.  If the relationship is not a qualifying one, you may seek a No Contact Order.  No Contact Orders are often an alternative avenue when a person doesn’t meet the criteria for a domestic violence victim. These orders can be made in conjunction with a criminal case.

Reasons for a Final Restraining Order Denial in NJ

Let us say, for example, that you have been granted a temporary restraining order.  Following the issuance of a temporary restraining order, a hearing is scheduled approximately 10 days later.  A plaintiff must prove his or her case through preponderance of the evidence.  The burden is on the plaintiff to prove that 1) defendant committed at least one act of domestic violence and 2) there is a continued need for protection. Consequently, if a judge finds that a final restraining order should be dismissed, the next logical question is: what happened that may have allowed a judge to conclude that a plaintiff should not be granted a permanent order of protection?  First, the judge may find that the defendant has not committed an act of domestic violence based on the evidence presented, whether it be criminal mischief, harassment, simple assault, terroristic threats, or another offense. Second, the judge may find the plaintiff does not require protection based on the testimony, facts or evidence. For example, if the plaintiff alleged a pattern of abuse, he or she may not have provided solid evidentiary support.  Evidence relating to this may be witnesses, screenshots of messages, images of injuries or copies of abusive text messages, videos, copies of social media posts, and more.

If the final restraining order is denied and you continue to be in fear for your safety, you still may have options available despite the dismissal.  The first option to consider is a Motion for Reconsideration. A Motion for Reconsideration essentially requests that the Court reconsider or reevaluate a previous decision based on an error which led the Court to finding a dismissal of the restraining order is warranted. Generally, such motions do not allow facts or circumstances to be relitigated. Instead, there needs to be substantial proof that an error has occurred. It is extremely important to note that submitting this type of motion does not give one the chance to add new evidence or take a different approach to one’s previously litigated arguments. The timeframe to submit this type of motion is 20 days from the date of dismissal. Defendants are also granted the right to file a motion for the same reasoning, if a restraining order is granted.

The second option that you have available is filing an appeal with the Appellate Division.  You have 45 days from dismissal of the restraining order to appeal the Judge’s finding.  The basis for a restraining order appeal must be alleged in good faith, which can include: errors with respect to evidence, mistake of fact, mistake of law, errors during the trial, and more. Mistake of fact means that a key fact in your argument was misunderstood and accordingly misapplied which resulted in the dismissal of the restraining order. Mistake of law, on the other hand, means that the law was improperly applied in your case.  Evidentiary errors could be reflected during oral argument through the Court allowing or barring certain evidence during trial. Granting or prohibiting certain evidence, or acting contrary to the Rules of Evidence, may have resulted in a different outcome in your case.

A lawyer can be profoundly useful when you’re concerned about a restraining order getting denied or you need help making sure the judge denies the protection order in your case. For instance, a qualified and skillful attorney can prove key elements of the plaintiff’s case by comprehensively reviewing the facts of the case and gathering evidence in support of one’s case and to also disprove adversarial arguments. Additionally, a lawyer can offset evidentiary issues by objections and ensure the arguments that are presented on one’s behalf are in accordance with the law and arguments presented by the defendant are not prejudicial to the Court. Furthermore, should a lawyer represent a defendant in a restraining order matter, it is also his or her duty to defend the defendant by disproving facts, when necessary, or conceding to certain facts when they are true.  Even if the allegations by the plaintiff are true, a strong advocate will help you argue the truths of your case coupled with how they relate to the law.

In either scenario it is crucial to have an attorney represent your case. For plaintiffs, it means that you can advocate for protection. For defendants, it means that you will advocate for your freedom against the constraints of a restraining order and the impact it will have on your future. You need to go into your trial with the tools, facts and clarity to properly advocate your case. There are usually a lot of emotions involved with restraining order cases because there is usually a history in some way with the other person. Aside from that, you need the facts and law to shine through to the Court.

Call The Tormey Law Firm today to speak to an attorney who can help you navigate and understand both the current and future impact of your case and what types of strategies we can use to resolve the case in your favor. Our lawyers have tremendous experience on this front and we are here to assist you. Contact our team at (908)-336-5008 for a free consultation.