How to Remove an Old Restraining Order in Union County, Elizabeth NJ 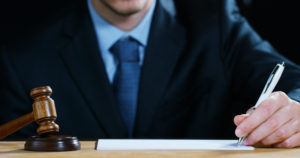 When a final restraining order is issued against a defendant, life as one knows it can significantly change.  From getting flagged in criminal background checks to completely hindering job promotions, there is so much at stake when a final restraining order has been issued.  Our out-of-state client was facing these issues from a restraining order that was issued a little over 19 years ago against him by his ex-wife in Union County NJ.  This effected his ability to travel abroad as well as his ability to own or possess firearms. After 19 years, the client contact the Tormey Law Firm in order to file a motion to remove the order as there has been a significant change in circumstances since the order was granted and it is no longer necessary to protect the victim.

Leading up to the issuance of the order, our client and his wife (the plaintiff) were fighting constantly and disparaging one another.  Despite the many verbal altercations amongst the parties, one day they engaged in a physical altercation following a disagreement over not cleaning their home.  The two began to exchange words, which then led to objects being thrown at one another. Ultimately, this caused our client to physically restrain the plaintiff from breaking their tv, and he allegedly covered her mouth when she started screaming.  The police became involved and the plaintiff later filed a restraining order against our client.

Circumstances significantly changed since the issuance of the order 19 years ago.  The parties were divorced in 2002 and shortly thereafter, our client moved back to his home state and married his high school sweetheart.  He and his new wife started a family together and moved out of state yet again for greater career opportunities. Now, the client is re-married, lives across the country, has children of his own, and has no connections whatsoever to his ex-wife, the plaintiff.

The plaintiff and our client did not communicate with one another since the restraining order was in place, they lived in different states, and did not have any children together.  The order was not serving as a means of protection, but instead acted as a form of punishment.

We drafted the paperwork and filed the motion. The plaintiff was served with the motion papers and she had an opportunity to object in writing and appear at the motion hearing to place her objections on the record in court. In most cases, if the plaintiff doesn’t object, the Judge will grant the motion (sometimes without even having a hearing at all).

Here, the Union County Superior Court Judge dismissed the final restraining order based on our motion to vacate which set forth factors under Carfagno v. Cargagno, oral argument and a plaintiff’s failure to meet her burden of proof alleging that restraining order needed to remain in effect. So, even if the plaintiff objects, the Judge can overrule the objection and dismiss the restraining order.

Our client is no longer chained by the effects of his restraining order, he can now seek greater employment opportunities through its removal and better provide for his family.  When having a final restraining order removed, you need to have the diligence and expertise of the attorneys at The Tormey Law Firm.

Here is a google review from our very satisfied client Joe:

“My ex-wife got a PFA 19 years ago. She tried to use this as leverage in the divorce proceedings. Although this did not work, the PFA continued to haunt me. Travis came through and had the PFA removed. Something that I am very grateful for.”

Get Rid of a Final Restraining Order Union County? Call Us

If you or a loved one needs assistance removing a final restraining order (FRO) that was issued against you in the past, we can help. Contact our offices now for immediate assistance and a free initial consultation.