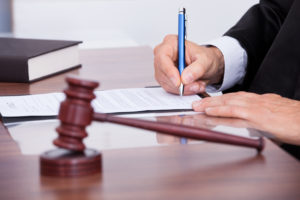 Need assistance with a temporary order of protection in Essex County? We can help.

In this case, the client and his ex-wife were married for 18 years. There were never any domestic violence allegations during the course of their marriage. They have two children in common and joint custody of same. There have been some arguments recently regarding the children and some nasty text messages sent back and forth. Based on these arguments, the plaintiff filed a temporary restraining order (TRO) alleging harassment.

Once a temporary restraining order is filed, the case is usually scheduled for a final hearing within 10 days. In the meantime, the Judge will address issues such as custody, parenting time, visitation (supervised or not), child support, etc. in the temporary restraining order. Then, the parties appear in court for the final hearing where the plaintiff can essentially do three (3) things:

In this case, the Plaintiff appeared in court and wanted to proceed with a trial. The parties must have all of their evidence gathered such as text messages, voicemails, witnesses, police reports, hospital records, photos, etc. for the Judge to view at trial and the other party to cross examine.

In this case, at the final restraining order hearing in Newark, Mr. Tormey was able to effectively argue that these verbal arguments “went both ways” and that some inappropriate and antagonistic comments were said by both parties. In addition, he was able to show that there was no violence ever and there was no need for the restraining order in this case to protect the plaintiff from anything.

In order to obtain a final restraining order in NJ, the Plaintiff must show that a predicate act of domestic violence occurred (in this case harassment, that there is a prior history of violence between the parties, and that the plaintiff is in fear for their safety and needs the restraining order as protection. Here, the plaintiff was not able to show that there was harassment. She was also not able to show a prior history of violence. Finally, she was not able to show that she was reasonably in fear of the defendant based on their verbal arguments back and forth about their children.

Fortunately, the judge agreed and dismissed the restraining order. This was a great result for our client and the Tormey Law Firm.

Review from Very Satisfied Client of the Tormey Law Firm

Here is the actual client review which was posted on AVVO.com regarding the representation the client received:

Upon consultation I hired Travis Tormey to defend me in a very emotional and scary time of need where I was facing a potentially devasting FRO. Travis was knowledgeable, comforting, and most importantly confident. THIS GUY KNOWS THE LAW! Watch his YouTube clips, read his reviews, and simply call him to discuss your case. I did and was so impressed with his amazing win in court. Don’t go into court without this guy in your corner. Consulted, hired, and successfully had my day in court. Thanks for everything, I hope I never need a defense attorney again, but if I do, Travis Tormey is the only lawyer I would use. All 5 stars !

For more information, please contact the NJ restraining order lawyers at the Tormey Law Firm at (908)-336-5008.