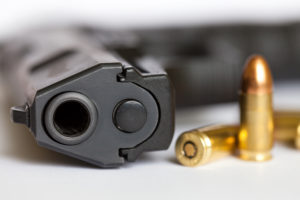 On August 24, 2016, New Jersey Governor Chris Christie vetoed two proposed gun control bills: one that would have made it more difficult for New Jersey residents to obtain concealed carry permits and the other that would have authorized a commission to research personalized handguns or “smart guns.” After issuing the vetoes, Governor Christie declared, “The right to own a gun is a fundamental one enumerated in the Constitution…I continue to oppose the relentless campaign by the Democratic legislature to make New Jersey as inhospitable as possible to lawful gun ownership and sales.”

Currently, pursuant to N.J.S.A. 2C:58-3, New Jersey has very strict laws regarding who can legally purchase a gun. New Jersey’s gun laws prohibit any person who has been convicted of a crime or a disorderly persons offense involving an act of domestic violence from possessing a gun.

In addition to imposing these prohibitions, New Jersey’s gun laws require potential gun owners to apply for and possess a Firearms Purchaser Identification Card before purchasing a long gun (a shotgun or a rifle). To legally obtain a pistol or handgun, an individual must also obtain a separate permit that is valid for only 30 days.

Governor Christie recently said that he wants to make New Jersey a “shall-issue” state for concealed carry firearms. The current New Jersey gun laws and regulations, specifically N.J.A.C. 13:54-2.3, sets forth three primary requirements that an applicant must satisfy in order to obtain a carry permit:

To learn more about gun laws and how to legally purchase a firearm in New Jersey, click here.